For more information on what Frim Fram 4 can do to make your event just what you want it to be, contact us at greg@frimfram4.com

Listen to all the songs from the 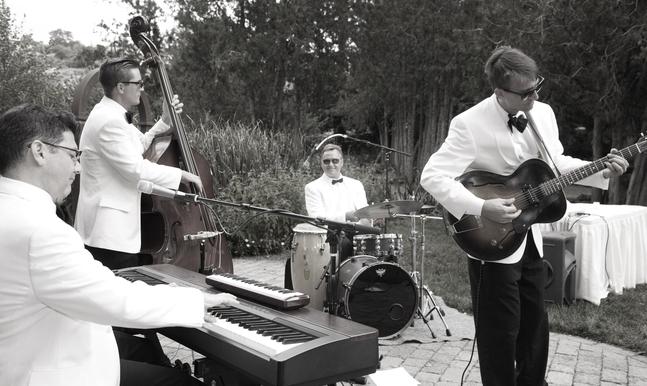 The Frim Fram 4, based in Boise, Idaho, specializes in the classic tunes of the 30's through the early 60's. Their original instrumentation reflected that of the Nat King Cole trio, relying on vocals, piano, stand up bass, and the exciting new sound of the electric guitar.  Dr. Andrew Cortens on piano, Jonah Shue on electric guitar and violin, Greg Belzeski on drums and congas, Cody Ramey on standup bass, and everyone joining in on vocals. (Old-school Gang Singing lives!) Their dedication to the musical style of the period has made them the most universally beloved musical group in Boise.

While the band's first motivation was to rejuvenate the hit records from the Nat King Cole trio, other icons of jazz have influenced their direction and repertoire.

Over the years the fabled and super-secret Frim Fram Book of Swing has grown to include arrangements from Nat King Cole, Duke Ellington, Hot Club de France, Sinatra, Louis (Armstrong, Jordan, Prima... pick a Louis - the era was full of greats), Bobby Darrin, Tony Bennett, and many others.  The Frim Fram 4's unflagging devotion to the initial conditions of the music they play has made them Champions of Swing in the eyes, and ears, of many of the region's people.

The Frim Fram 4 are featured artists at the Idaho Shakespeare Festival. While being the initial launch pad of this Space Age ensemble, Thursday night at Pengilly's had gained such a following and notoriety that it was chosen as one of the Sexiest Places in the World to take and, yes, plant a smooch on a date by Cosmopolitan Magazine. 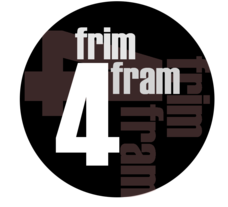 of their original song, Don't Scratch That Riff, Cat!